Can you tell what this pattern is?

Does it look like something humans designed, like the inside of a building? A sculpture? Or is it something created by nature?

Here’s a clue: It took a couple of seconds to create it. That time doesn’t include taking the picture (a few seconds) or the time to get the material (easy to find or make). But then to go from a smooth shape to this pattern, the process was almost instantaneous.

I lifted a big book (we used a large art history book) over a cone-shaped paper cup, and my three year old daughter then said “One, two, three, go!” I dropped it on the cup. Boom!

The smooth cone-shaped paper cup turned into what you see here.

She was as pleased as I was with the result. “Patterns! You love patterns. Looks like a flower” she said.

The cone was flattened but you can easily pull it back into a cone, except that instead of a smooth cone we have this folded pattern. 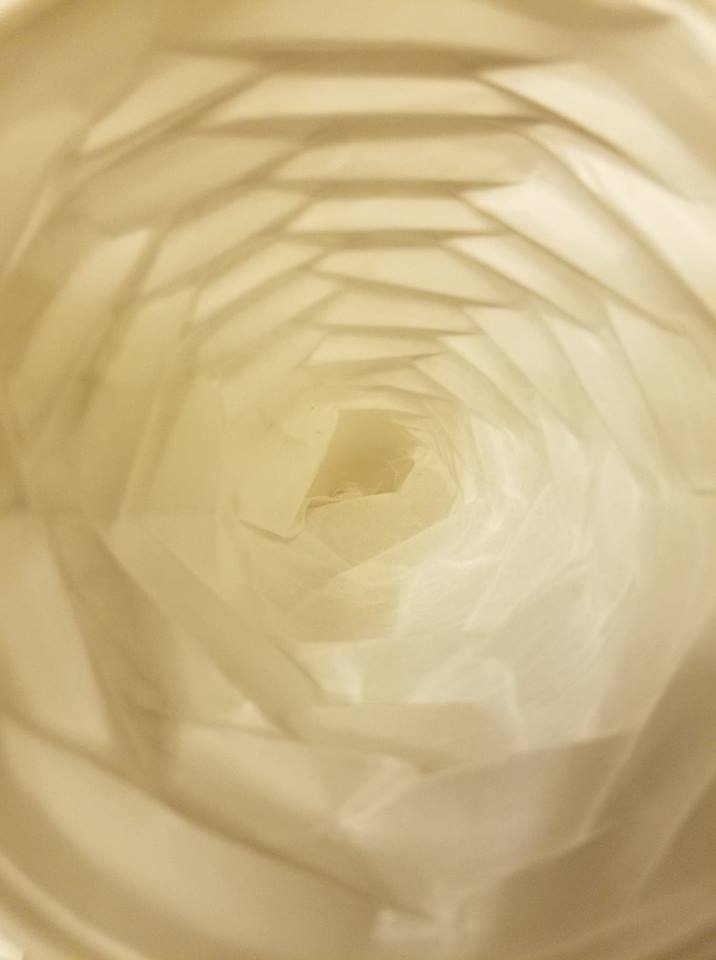 Fascinated with this pattern, and the functionality of it as a folded cone, I did some research and found that a woman named Biruta Kresling had discovered something very similar. She made her own cones with origami paper, then quickly crushed it. More interesting to me, I found a scientist, Taketoshi Nojima, had figured out a formal way, an exact pattern, to make origami cones that fold flat when pressed from above.

Now it so happens, that making an origami cone that folds flat is a great mathematical feat. Some scientists had pointed out that many origami folds could not fold flat, some folds lock up, conflicting with other folds, leaving the origami a 3D structure. One has to mathematically orchestrate the folds so that they will work together without conflict to flatten out when pressed. There seems a global coordination that allows it to fold flat, while the individual folds look like little diamonds.

I tried to fold these origami cones, with the happy result below (orange, green, one in white). The origami takes a while to fold, but once finished, it forms a cone that, when pressed, flattens out perfectly. The crushed cones we made (instantly) have a very similar pattern. Likewise, they all can fold completely flat.  They all also form spirals, around the cone, that are similar (from the top or bottom view) to what we see in flowers (see our page on golden angle spirals). You may notice that the spiraling shapes look much like the pineapples and pine cones we examine on the spirals page and in our pine cone art projects, book on golden angle spirals, and spiral coloring book. 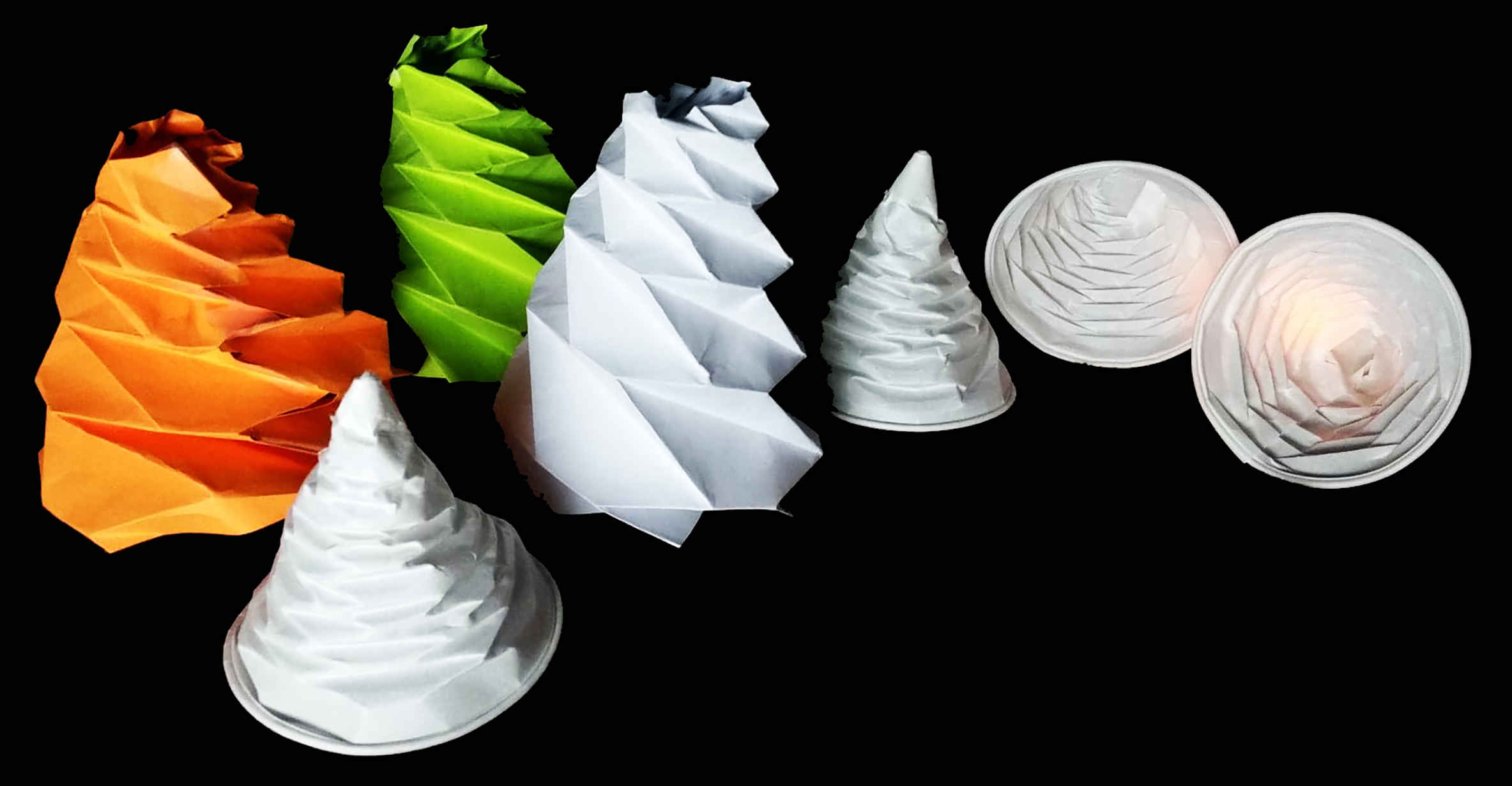 The general outline of the patterns jump out when lit from inside, or behind we used tiny electric candles). The effect is striking. 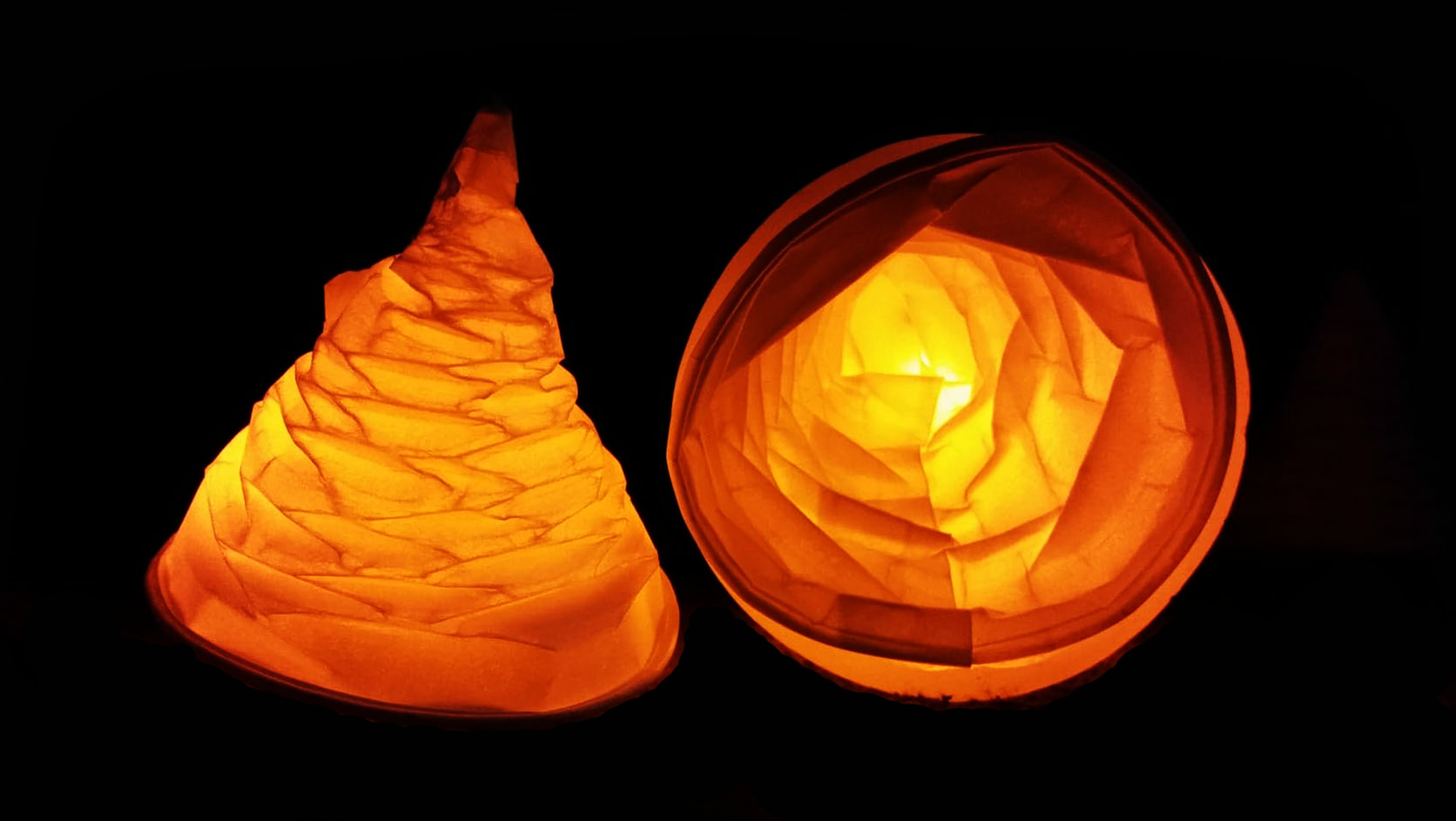 You can see the seams in some photos of the paper cups. The pattern didn’t always show up near these seams, probably because the seams are double layers, with some glue holding them together. Sometimes, the cones just split or ripped when we dropped a book on them. Yet we quickly ended up with dozens of beautiful the center.

Looking closely at the pattern in these crushed cones, we see a tiling of hexagons, six sided shapes each with six neighboring hexagons. The shapes are usually slightly flattened hexagons, with a fold going through the center. This is very similar to the origami cone fold published by Taketoshi Nojima.  On the right is the fold pattern. The dotted lines are folded  mountains, with ridges pointing upwards, and dark lines are valleys that point downwards.

Unlike this beautifully planned, engineered origami, the crushed cones have a similar pattern, despite being instantaneous and a completely spontaneous. Yet, the human engineered and natural spontaneous patterns are very similar. 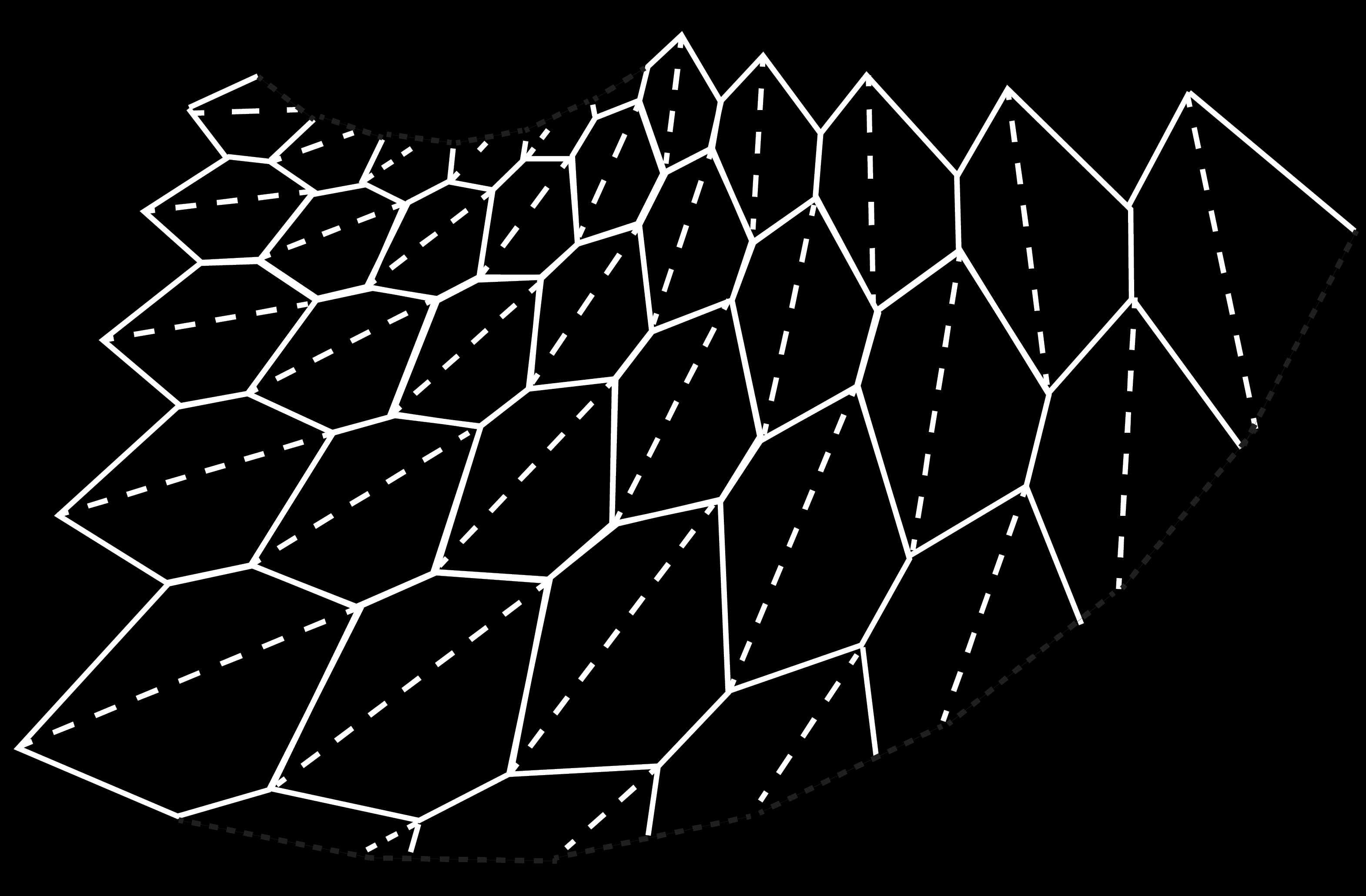 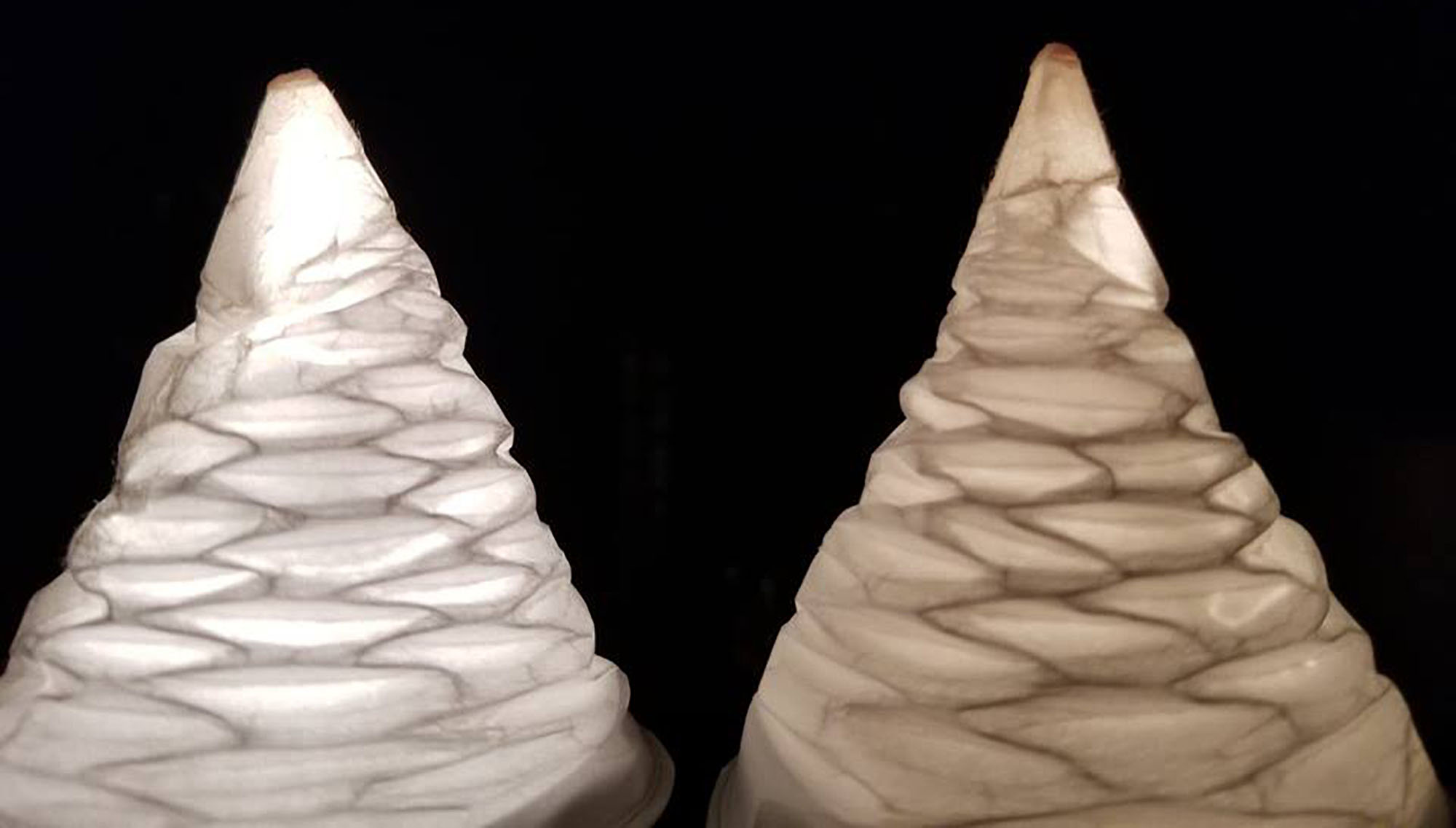 We consider these just as much beautiful art as beautiful science.

The instructions and materials to make all these cones are in a Beautiful Discovery Box, along with golden angle spirals and parabolas, We call that box “Spirals & Parabolas,” the second box in your subscription. 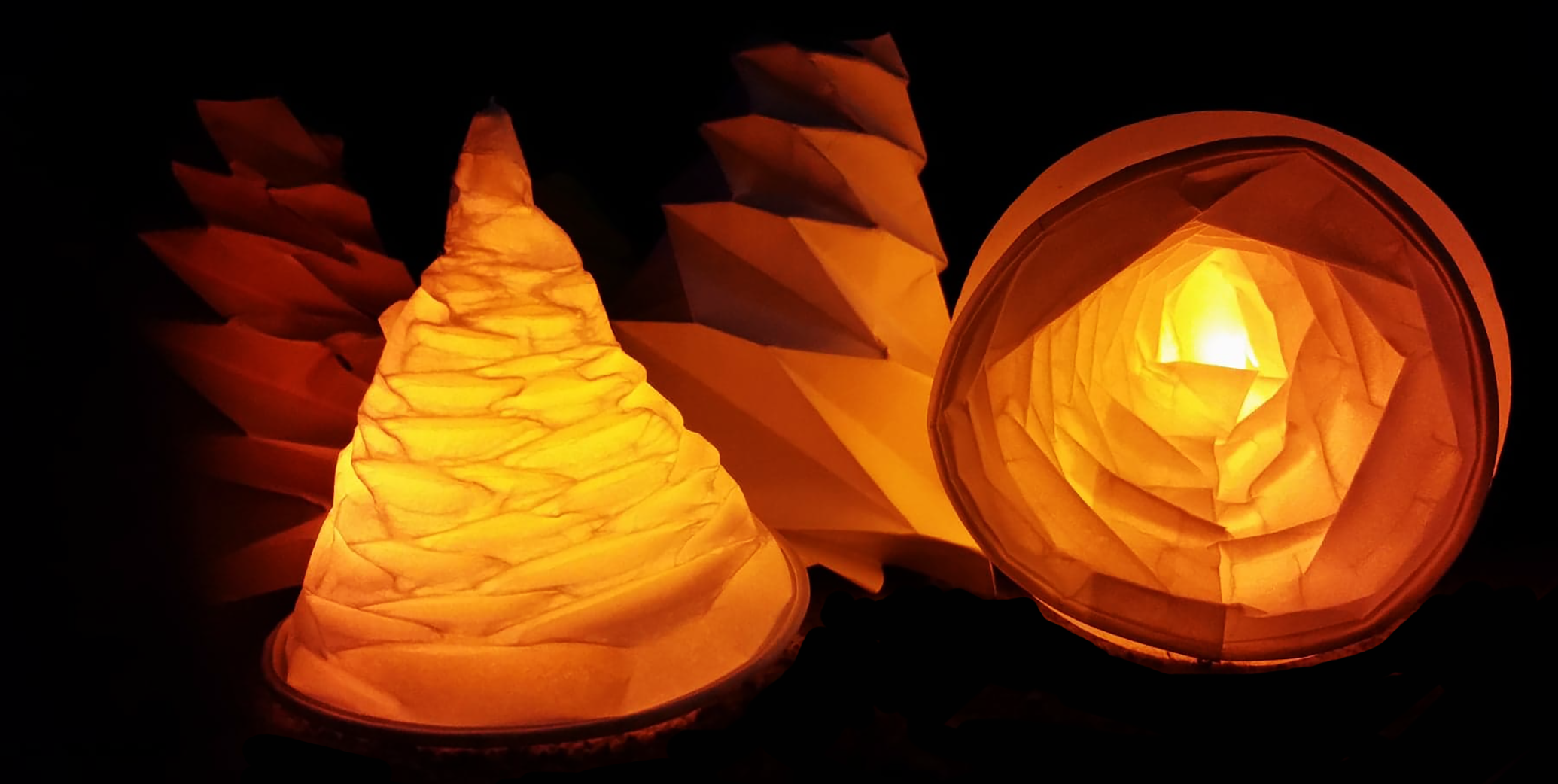