How did the leopard get it’s spots?

How did tiger get stripes? One clue is that animal tails often have bands, even when the animal body has spots? It is as if spots need enough room to grow. In fact, the tails of some animal embryos are so tiny that the spots soon reach all the way around, forming bands. A thicker tail or leg may have spots, because there is room for the whole spots, but the skinny part of a tail has bands.

But this still leaves us with the question of how a patternless blob of cells develop patterns? Each cell of the early embryo is not much different from the rest. So, how do patterns start?

In an embryo, where there is very little room for expansion, such as in a narrow tail, spots become bands. Where there is more area, spots develop.

The positive feedback causes the color to spread in little clusters. The clusters expand until the negative feedback stops the expansion.

On a large sheet of cells, the positive and negative feedback result in complex patterns. Even if you start with a random mix of black and white pigment cells, you end up with spots or stripes, as originally proposed by Alan Turing. Turing’s model boils down to simple rules that are repeated to create a great variety of spots and stripes.

Complex patterns in nature form from simple rules, repeated over time and space.

The B-Z reaction models produce spots and stripes just with chemicals in a dish. Imagine a red chemical that says STOP, GO BACK and a green chemical that says GO. The green chemical gives positive feedback signals, saying “go further” in the direction it is already going. The negative feedback pulls the system back in the opposite direction once a threshold is reached. It starts out as a patternless soup of chemicals. Then we see a ring of green GO expanding, then a circle of red, then a circle of green, and so on, expanding like ripples in a pond. This mechanism generates expanding circles, then seemingly endless patterns of swirls and scrolls.

Here’s a dramatic linear variation of the same diffusion model, where particles move straight down and the coral like branching grows upwards.

These models, and the art projects we provide in in your subscription box, try to capture simple rules for generating spots and stripes.

Here is a snapshot from Kathy’s  lesson on scaling, enlarging, a pattern. The general idea is to use a photo you like of any natural pattern, zoom in on a section using a grid and copy the contents, cell by cell, to a larger grid. 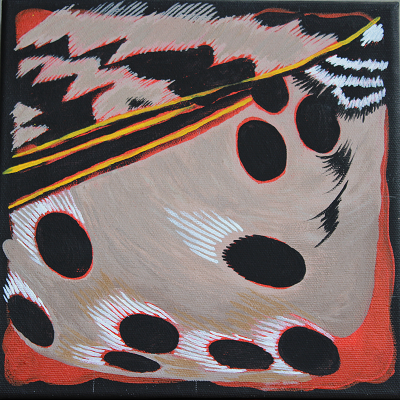 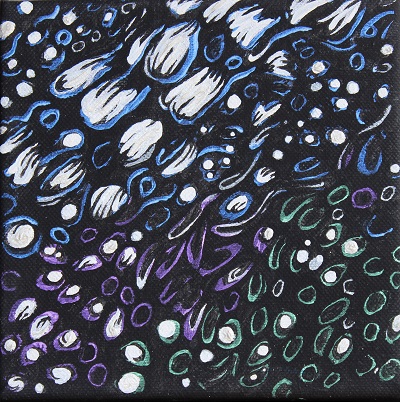 One way to study patterns from the point of view of the artist is to take a very closeup view. Contrast this closeup with a distant view. Above is Kathy’s paintings of closeup patterns on a flicker and a loon. A theme we pursue both with art and modeling lessons is abstraction, simplification that captures the essence. The simplicity of rules producing a complex diversity of patterns is elegance.