Often we trust others with something valuable. We trust this other person (the “trustee”) not to take the valuable item away from us. Some trust situations are like simple trust games such as the following: Three persons play this game. One person plays the role of “Proposer.” One person is the “Responder.” One person plays the role of “Mister Money Bags.” Mr. Money Bags gives $10 to each of the other two persons and says:

“Each of you two can give the other person your $10 or keep it. If you give the other person your $10, then I will double that amount and they will receive $20. You have to take turns making this decision to give or keep your $10. The Proposer goes first. If the Proposer gives their $10, the Responder will gain $20, because I will double the amount you give. Then the Responder takes a turn. If the Responder gives their $10, I’ll double it, and the Proposer gains $20. So if you both give, you both end up with $20. If you both keep, you both end up with $10.”

This game has been played all over the world, and the typical results vary from one region to another. Social scientists of various kinds have carefully monitored these games and the results in different cultures. They examine how often Proposers give, a measure of trust and altruism, and how often the Responders give, a measure of reciprocity (giving back) or altruism. Apparently, the degree of trust, reciprocity and altruism varies with culture.

Scientists also have examined how people play this game when in different physical states, and after experiencing different situations. Trust, reciprocity and altruism do depend upon one’s situation.

I performed a variation of the game, with over 200 University students, but used food vouchers instead of money. I used food vouchers for either healthy or unhealthy food to see if trust and reciprocity was associated with food choice.  You can read about the results in this article (click here). We also modeled this food decisions and trust behavior in social networks (click here).

There are variations of this game. In one variant, the two persons with $10 are in separate rooms, and Mr. Money bags goes to both rooms to tell the other two to either give or keep. If they give the other person gets $20, because Mr. Money Bags doubles any gift. So the rules are the same as before but there is no turn taking the two persons in separate rooms don’t see the other persons decision until the game is over. Will the two cooperate or not? Such a game is often called the Prisoner’s Dilemma. The story that goes with this model is that two prisoner’s in separate cells each can either cooperate with each other or defect by ratting on the other. Either can gain the most reward by ratting on the other, but if both rat on the other, both gain nothing (and remain in jail).

Punishment, forgiveness in repeated rounds
When the trust and cooperation games are repeated for several rounds of play, we have the opportunity to reciprocate the partner’s behavior, retaliate or else forgive a defection. Use our simple computer model to experiment with different strategies of cooperation and defection in repeated interactions. 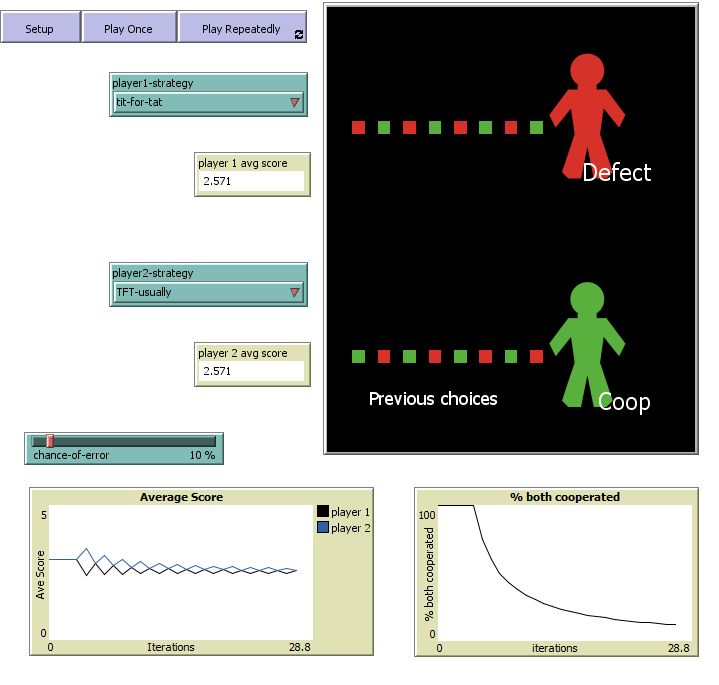 “Tit for tat” is doing whatever your partner did, reciprocating any cooperation but punishing any defection. “Tit for tat” is like “I will scratch your back if you scratch mine”  but also “an eye for an eye.”  Retaliating against Another common strategy in repeated trust games is to forgive one betrayal then punish if there is a second betrayal, a strategy called “forgive once” and also “tit for two tats.” In everyday interactions, people commonly employ a “tit for tat” behavior, cooperating with those who offer to help us. It is common to become angry with those who do not cooperate. That anger often results in retaliation,  then leading to a collapse in cooperation. However, sometimes one will defect (not cooperate) by accident. That is, defection is not always planned, let alone a habit. Many people generally cooperate but once in a while defect by mistake, perhaps distracted or upset about something else entirely, or for whatever reason not able to carry out the action of cooperation. For that reason, tit-for-tat (TFT) is not the ideal strategy for maintaining cooperation. Rather, forgiving a defection can restore cooperation. However, a person who always forgive, all the time, is open to exploitation. Thus, a strategy such as forgive one betrayal then return to tit-for-tat can be effective in maintaining cooperation.  But forgiving a defection is difficult if one reacts with anger to the defection. This has become a popular research topic for psychologists and neuro-scientists in recent years. Yet for millennia,  many religions, philosophies, mythologies, and spiritual practices recommend various strategies, describe likely consequences and address the issue of underlying emotional reactions.  See our page on fables and stories of forgiveness and retaliation, and accompanying Scratch programs, such as “A Deer Teaches Forgiveness” and “A Cat and Mouse Tale of Cooperation” from the Mahabharat.” 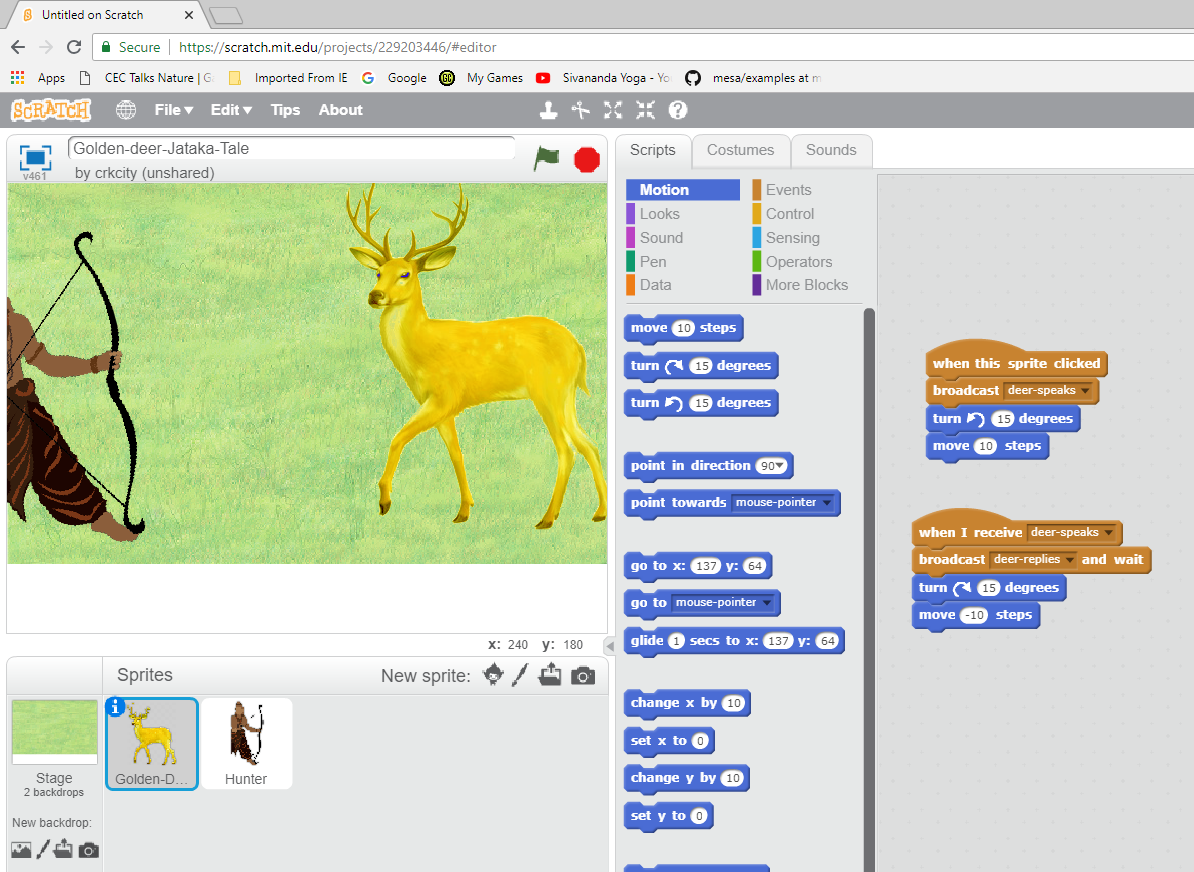 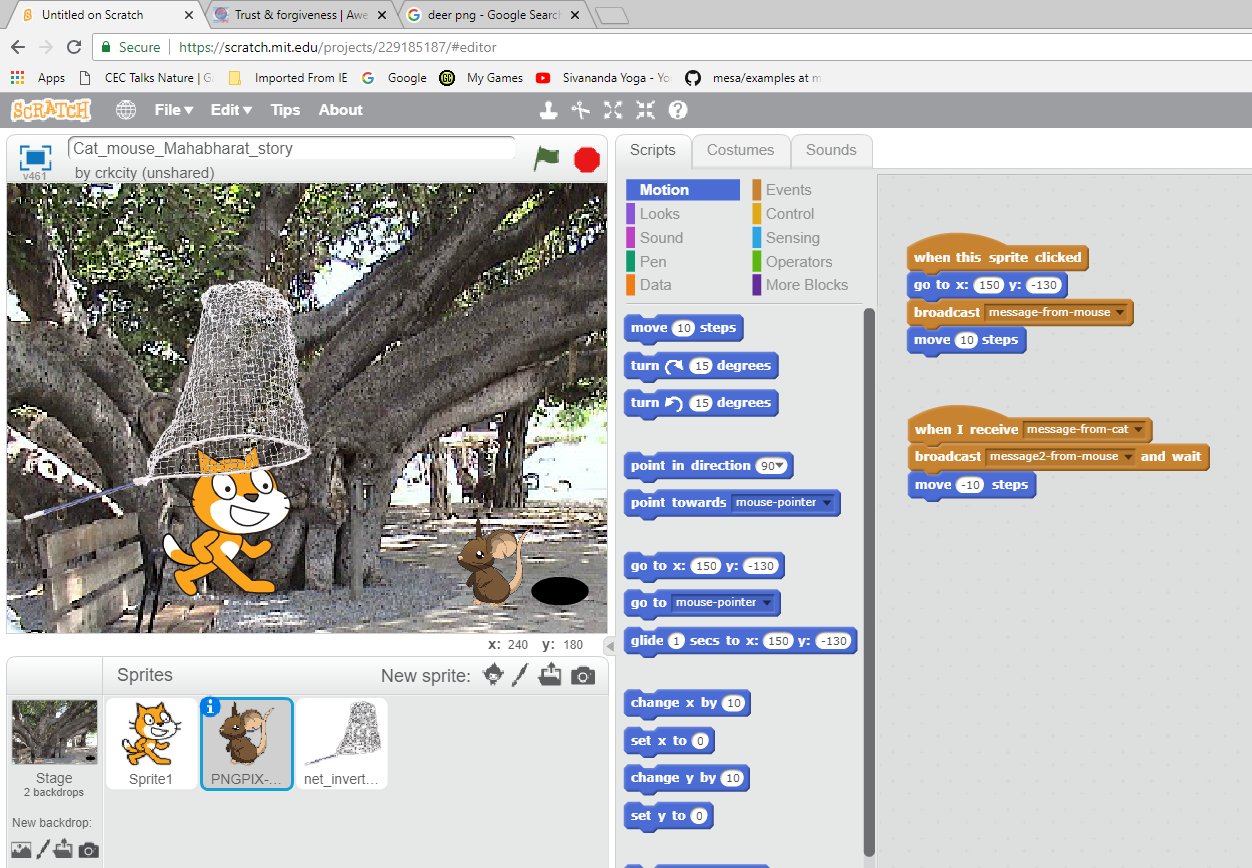